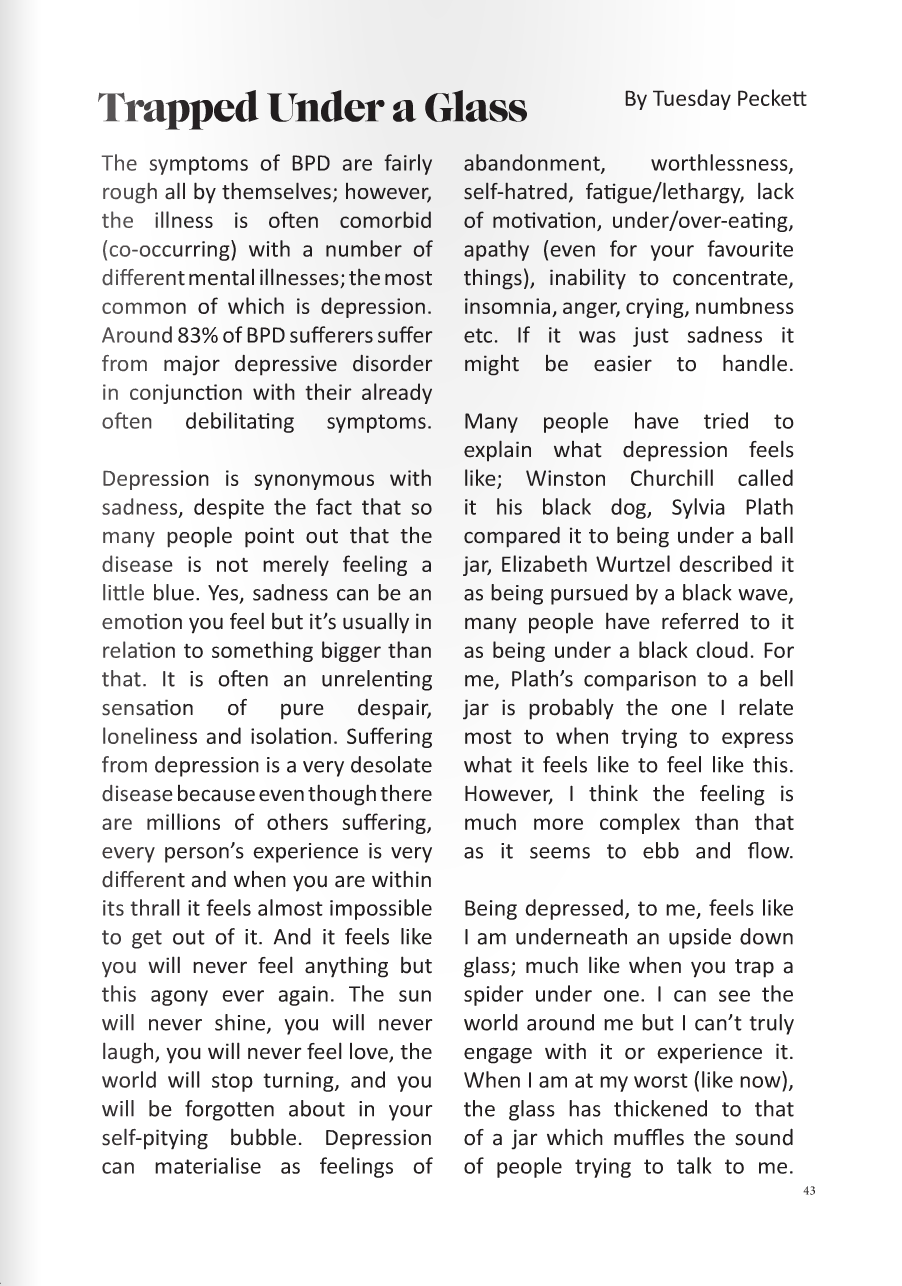 Welcome to Day 27 of our run of Zine 2 submission posts. We’re part way through posting each submission in order of appearance in our zine. Today’s post features words by Tuesday Peckett.

We introduced you to Tuesday on day 15 We will feature another piece by Tuesday in future posts, so look out for her. If you would like to buy a physical copy of her work in our zine, click here: http://designingoutsuicide.bigcartel.com/product/designing-out-suicide-issue-2

Thanks again Tuesday, we really love reading your work. You couldn’t have put it better.

Trapped Under a Glass

The symptoms of BPD are fairly rough all by themselves; however, the illness is often comorbid (co-occurring) with a number of different mental illnesses; the most common of which is depression. Around 83% of BPD sufferers suffer from major depressive disorder in conjunction with their already often debilitating symptoms.

Depression is synonymous with sadness, despite the fact that so many people point out that the disease is not merely feeling a little blue. Yes, sadness can be an emotion you feel but it’s usually in relation to something bigger than that. It is often an unrelenting sensation of pure despair, loneliness and isolation. Suffering from depression is a very desolate disease because even though there are millions of others suffering, every person’s experience is very different and when you are within its thrall it feels almost impossible to get out of it. And it feels like you will never feel anything but this agony ever again. The sun will never shine, you will never laugh, you will never feel love, the world will stop turning, and you will be forgotten about in your self-pitying bubble. Depression can materialise as feelings of abandonment, worthlessness, self-hatred, fatigue/lethargy, lack of motivation, under/over-eating, apathy (even for your favourite things), inability to concentrate, insomnia, anger, crying, numbness etc. If it was just sadness it might be easier to handle.

Many people have tried to explain what depression feels like; Winston Churchill called it his black dog, Sylvia Plath compared it to being under a ball jar, Elizabeth Wurtzel described it as being pursued by a black wave, many people have referred to it as being under a black cloud. For me, Plath’s comparison to a bell jar is probably the one I relate most to when trying to express what it feels like to feel like this. However, I think the feeling is much more complex than that as it seems to ebb and flow.

Being depressed, to me, feels like I am underneath an upside down glass; much like when you trap a spider under one. I can see the world around me but I can’t truly engage with it or experience it. When I am at my worst (like now), the glass has thickened to that of a jar which muffles the sound of people trying to talk to me.

Not only that but the glass is not free floating; I have to push it around to be able to move so the thicker the glass, the heavier it is. That slows down my movements and tires me out extremely easily making the idea of going anywhere and doing anything almost deplorable. Even when I am surrounded by other people that glass is still there; I cannot interest properly with them and I can’t always here what they are saying; I really have to concentrate to be able to engage. Luckily, some people shout loud enough so I can hear them and for a short time the width of the glass is forgotten, but it never goes away.

When I am feeling almost normal and much less depressed the glass is still there, albeit thinner and easier to move around. Nonetheless, it is still a barrier to the world around me and I have never truly felt connected to it. When I was with my ex, at one point that glass got to the point where it was super thin when I was around him, but it was still there. I could never throw it off enough to get out or to let him in with me. He stood on the other side of that glass trying his hardest to lift it or to smash it with his bare hands but it was having none of it. That glass still stands between us even now as we try to develop into a friendship; I want nothing more than to let him in completely, to throw away this glass that is suffocating me, but I can’t do it. I don’t know how.

It does scare me that I’ll never feel completely connect to the world or to another person. The world doesn’t feel real to me because I can’t see it clearly through the thick glass that refracts all the light that hits it. I am alone in here, hoping that one day I will break free. People keep throwing tools at me that I can use to get out but I don’t know how to use them, and right now the glass is too thick for me to get to them. Everything is just out of my reach.

I am still trying though, mostly for a lack of anything else to do. I’m trying to socialise more; making an effort to organise to spend time with different people. And I am trying to get back into exercising too. Hopefully these things will slowly start to make that glass get thinner again. 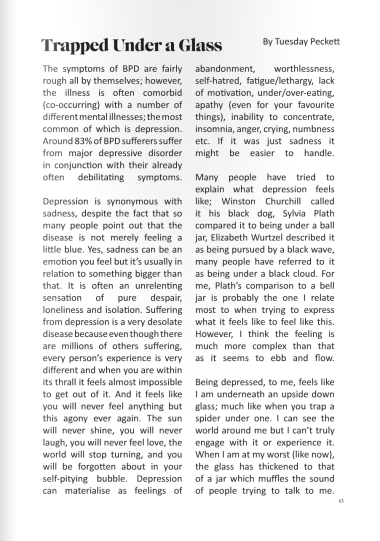 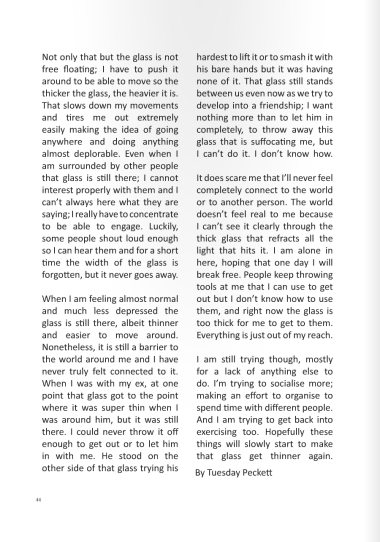