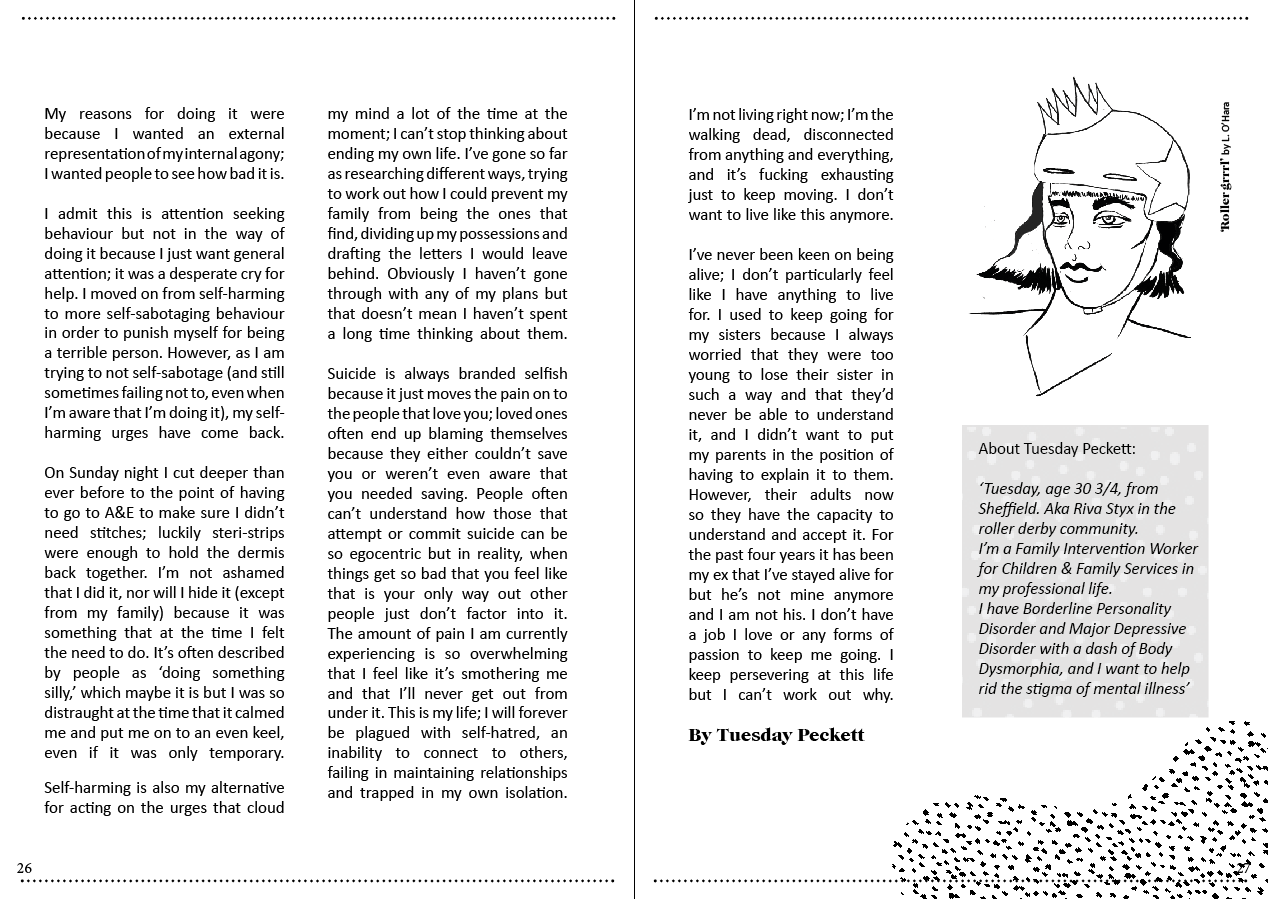 Day 15 of our run of Zine 2 submission posts features the words of Tuesday Peckett (roller derby name Riva Styx). She submitted the words below quite early on in our call for submissions, as I recall I got quite emotional when reading it. Moments like these reaffirm what the zine is all about. Hopefully, accounts like these can make people understand how hard it is for sufferers of mental health problems to convey how they are feeling, and to what extent it is affecting their lives. Tuesday has more work in the zine, so look out for her in future posts. If you would like to buy a physical copy of her work in our zine, click here: http://designingoutsuicide.bigcartel.com/product/designing-out-suicide-issue-2

‘Tuesday, age 30 3/4, from Sheffield. Aka Riva Styx in the roller derby community.
I’m a Family Intervention Worker for Children & Family Services in my professional life.
I have Borderline Personality Disorder and Major Depressive Disorder with a dash of Body Dysmorphia, and I want to help rid the stigma of mental illness’

Razors pain you; Rivers are damp; Acids stain you; And drugs cause cramp. Guns aren’t lawful; Nooses give; Gas smells awful; You might as well live.
– Resume by Dorothy Parker 1926

Suicide and self-harm are the taboo words of Mental Illness; the general public often see such acts as attention seeking and so they are sometimes not taken seriously for what they really represent. Medical professionals often brush self-harming and suicide attempts under the carpet; you get patched up and told to talk to someone, but if you choose not to then they just let you leave like it’s no big deal. But as soon as a celebrity commits suicide then the world is up in arms about how terrible depression is and how those who suffer from it should speak up so they can be helped. It’s no secret that there’s a stigma around mental health problems; everyone knows about it but no one’s supposed to talk about. I, however, challenge that by wearing my problems on my sleeve. I have a personality disorder, I suffer from depression, every day is a fucking struggle just to keep moving forward but I am trying my hardest to build myself back up. Some days I fail but I’m not ashamed to admit it to the world because this shit is hard and if you’ve never been through it, it’s very difficult to comprehend but I want to help people understand both the disease and how to help those that suffer. My mum chastises me constantly for my public sharing of my problems; she thinks I lack dignity by being so transparent. Dignity is defined as, “calm, serious, and controlled behaviour that makes people respect you.” Anothing to be ashamed of, and I refuse to be embarrassed by it. So many people suffer in silence because society makes it seem shameful, and by suffering alone they often turn to self-harm and suicide as their only comfort. My mum believes I should act like everything’s fine and not let anyone see how broken I really am. The only times I hide my mental health issues is around strangers, at work and around my family; they have no clue how bad things are right now.

I used to self-harm in my early twenties; mostly when I’d been drinking and usually using broken glass that mostly just scratched through the surface, causing some pain and a little bit of blood.

My reasons for doing it were because I wanted an external representation of my internal agony; I wanted people to see how bad it is.

I admit this is attention seeking behaviour but not in the way of doing it because I just want general attention; it was a desperate cry for help. I moved on from self-harming to more self-sabotaging behaviour in order to punish myself for being a terrible person. However, as I am trying to not self-sabotage (and still sometimes failing not to, even when I’m aware that I’m doing it), my self-harming urges have come back.

On Sunday night I cut deeper than ever before to the point of having to go to A&E to make sure I didn’t need stitches; luckily steri-strips were enough to hold the dermis back together. I’m not ashamed that I did it, nor will I hide it (except from my family) because it was something that at the time I felt the need to do. It’s often described by people as ‘doing something silly,’ which maybe it is but I was so distraught at the time that it calmed me and put me on to an even keel, even if it was only temporary.

Self-harming is also my alternative for acting on the urges that cloud my mind a lot of the time at the moment; I can’t stop thinking about ending my own life. I’ve gone so far as researching different ways, trying to work out how I could prevent my family from being the ones that find, dividing up my possessions and drafting the letters I would leave behind. Obviously I haven’t gone through with any of my plans but that doesn’t mean I haven’t spent a long time thinking about them.

Suicide is always branded selfish because it just moves the pain on to the people that love you; loved ones often end up blaming themselves because they either couldn’t save you or weren’t even aware that you needed saving. People often can’t understand how those that attempt or commit suicide can be so egocentric but in reality, when things get so bad that you feel like that is your only way out other people just don’t factor into it. The amount of pain I am currently experiencing is so overwhelming that I feel like it’s smothering me and that I’ll never get out from under it. This is my life; I will forever be plagued with self-hatred, an inability to connect to others, failing in maintaining relationships and trapped in my own isolation.

I’m not living right now; I’m the walking dead, disconnected from anything and everything, and it’s fucking exhausting just to keep moving. I don’t want to live like this anymore.

I’ve never been keen on being alive; I don’t particularly feel like I have anything to live for. I used to keep going for my sisters because I always worried that they were too young to lose their sister in such a way and that they’d never be able to understand it, and I didn’t want to put my parents in the position of having to explain it to them. However, their adults now so they have the capacity to understand and accept it. For the past four years it has been my ex that I’ve stayed alive for but he’s not mine anymore and I am not his. I don’t have a job I love or any forms of passion to keep me going. I keep persevering at this life but I can’t work out why. 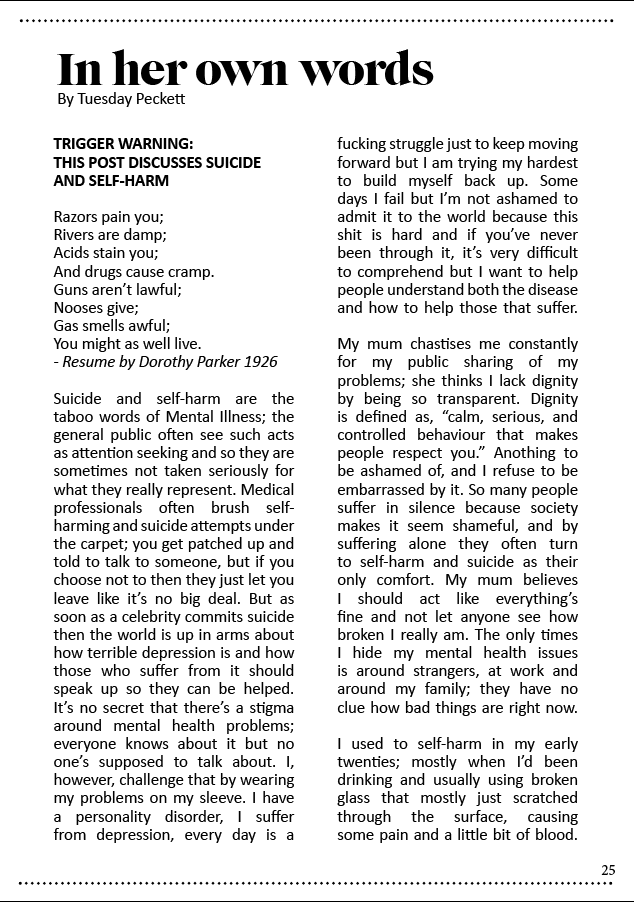 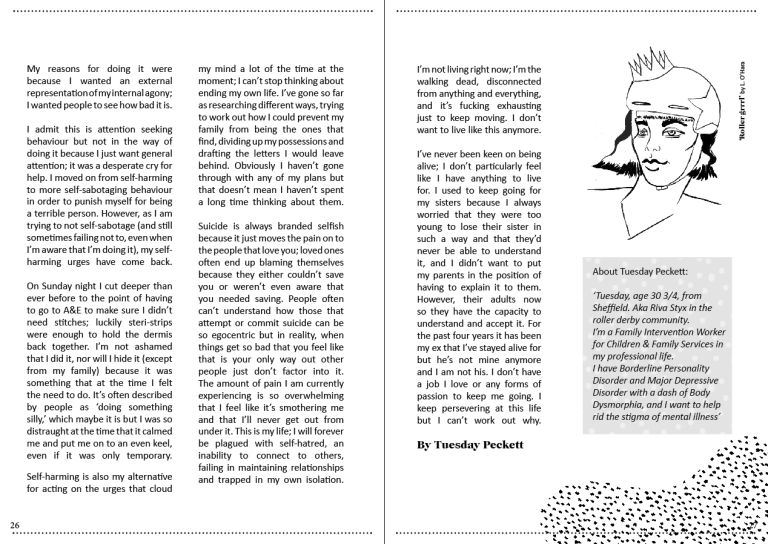